Frankly, My Dear: Gone with the Wind Revisited

Reviews of Frankly, My Dear

Adam Begley in the New York Observer
"Gone with the Wind Decoded"
February 24, 2009

Exuberant is the best word for Molly Haskell’s Frankly, My Dear,... a slim, unfailingly intelligent, fact-filled book that sets out to explain why Gone With the Wind (both book and movie) exercises such a potent and enduring hold on our imagination. Ms. Haskell...argues convincingly that the power of the Gone With the Wind archetypes—their “extraordinary human resonance”—derives principally from the deeply divided natures of Margaret Mitchell, David Selznick and Vivien Leigh. The argument touches on a wide variety of complicated topics, from race and gender to mass culture and the history of the Civil War, but that doesn’t stop Ms. Haskell from paying minute attention to the details, say, of the saga of how Leigh got to play Scarlett. In short, Frankly, My Dear is both ambitious and entertaining, cultivated and gossipy. On the one hand, Ms. Haskell quotes William James on our eternal fascination with war; on the other, she quotes Howard Hughes on the difference between swaggering Victor Fleming and the kindly, sensitive George Cukor: “Victor has the same talent, it’s just strained through a coarser sieve.”
To give you a taste of the sheer verve of Ms. Haskell’s writing, here’s her summary description of Leigh, Ingrid Bergman and Greta Garbo before they were transformed into bona fide stars: “These actresses hadn’t yet had their eyebrows plucked, their teeth whitened and straightened, their breasts raised, their hairlines changed—in other words, been submerged in the Hollywood developing emulsion that raises star power to its full electromagnetic force.”


Armond White in the New York Times Book Review
"What the Wind Blew In"
February 26, 2009

“Frankly, My Dear” praises “Gone With the Wind” for illuminating still-conflicting romantic ideas. This comes at a time when film culture has fragmented into fan-boy/chick-flick dichotomies and populist-­versus-elitist criticism. Haskell’s endeavor, different from high-art appreciation yet not far from it, brings together audience taste and intellectual specification. Since adolescence, her admiration for the film has developed into “a more grown-up affection informed by a film lover’s appreciation of the small miracle by which a mere ‘woman’s film’ with a heroine who never quite outgrows adolescence was transfigured into something much larger, something profoundly American, a canvas that contains, if not Walt Whitman’s multitudes, at least multiple perspectives”...

In Haskell’s thoughtful revisionism, Scarlett comes to embody personal and national contradictions. The chapter “E Pluribus Unum” shows how the “dualisms” of her creators were gathered into a credibly whole personality. Focusing on Scarlett’s turbulent, childlike ways, Haskell illustrates the traits of beauty, self-regard and “the uninhibited will to act” that have made “Gone With the Wind” one of the least dated classic Hollywood movies. These attributes will always be disputed, but Haskell’s critical sensitivity rescues Scarlett’s Americanism and femininity, indicating how her image redounds upon our eternal political struggles and deepest fantasies. Haskell clarifies the long shadow that Scarlett O’Hara casts over the American movie imagination. 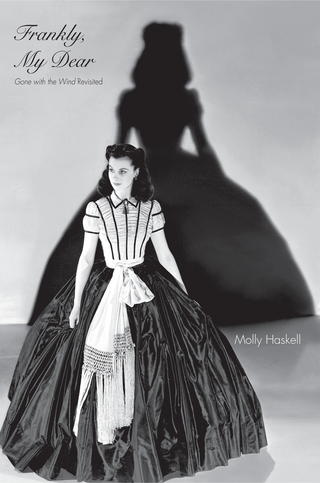