He Drives Me Crazy 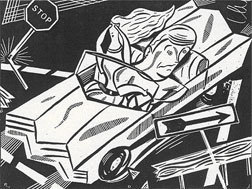 Even Before the President was seen driving around recently to promote the virtues of ethanol, Barbara Bush announced that she wouldn't ride in a car driven by her husband because he was out of practice. My husband is never more dangerous than when he is "in practice," i.e. the summer and fall months when we drive out to Long Island each weekend.

Mrs. Bush's statement has released me from the tacit bond of wifely silence that has surrounded what is, far more than sex or money, the dirty little secret of marriage: the husband-lousy-driver syndrome. If the image of the lousy-woman-driver has been advanced with such relish, it is to disguise a truth that goes against the very definition of manhood in a country in which driving and virility are synonymous.

After polling some women friends, I discovered that the H-L-D syndrome is the real crucible of many marriages, raising as it does all sorts of shameful feelings on the part of supposed feminists, namely the atavistic expectation that men should take care of us and that one of the ways they do this is by conducting us safely from one place to another.

I admit that my husband, Andrew, and I are extreme, like Jack Sprat and his wife, and that the problem arises in its most intense form among couples of our particular social configuration - the Anglo-Saxon female married to the urban ethnic. The latter is the type of driver who learns late and, as with a foreign language, never commands it gracefully or with authority. But bad driving is not restricted to this subspecies. Our friend Arthur, irretrievably WASP, is a bad driver of quite a different and more daring sort. This came as something of a revelation.

We convened at Martha's Vineyard one weekend, Andrew driving me and Mary Stewart, Arthur's wife, while Arthur took the plane. After catching her breath from the trip, Mary Stewart was as ecstatic as a geologist who's made a find.

"Andrew is a worse driver than Arthur!" she pro- claimed to everyone, over and over. I was quite prepared to believe it, happy only that there was another husband in the world who was even in Andrew's class. But on the return trip, as the two men took turns at the wheel, I found Arthur's driving significantly worse than Andrew's, and argued the point. True, they are different types of bad drivers: Arthur tools along with a sense of entitlement, as if the whole world were a road on which his was the only vehicle, whereas Andrew chugs forward with a nervous, stop-and-start urban angst. Thus, the debate is inconclusive, but Mary Stewart and I derive a good deal of consolation and exorcise our fears by discussing the taboo subject of driving-impaired husbands.

The facts on which Andrew and I agree are these: He likes to drive but is a terrible driver, and I am a good driver with a pathological aversion to getting behind the wheel. Every year we have what Andrew insists on calling a "freak accident." He bumps the rear fender of a truck, sideswipes a parked I car, burns out the emergency brake. These are perfectly normal, everyday, garden-variety accidents, the responsibility for which is legally and quite plainly his, but which he must dramatize by invoking a deus ex machina to exonerate the dummy in machina.

This year, to economize, we decided to rent a car each weekend instead of leasing one for the season, a decision that has saved us some money but takes its toll in other ways, namely in a prolonged get-acquainted period with a new car each week.

In an equivalent of the nonathlete who never acquires "muscle memory," Andrew has no car memory. He takes 10 minutes to locate the safety belt and secure it, another 10 to find the automatic gearshift panel. Meanwhile, he is muttering and cursing the car and the rental company the whole time, and I we are off to a bad start.

When he stops at a traffic light, he puts the shift in neutral, as if he were driving a stick shift. However, by the time the light turns green he has forgotten he is in neutral, and there is a heave as he presses the gas and the car goes nowhere, or stalls. There is a blaring of horns, nervousness.

Somehow, with me co-piloting, we get out of the city. Now, Andrew experiences a sense of freedom. He rolls, or push-buttons, the window down, and immediately the car caroms wildly into the adjoining lane. He is one of those people who can't roll down the window and keep the car in the lane at the same time. Window down, car lurch. Horns honk.

Many bad male drivers try to cover up for a sense of insufficiency by speeding. Not Andrew. A poke and a lurcher by nature, the quintessential absent-minded professor, these tendencies are magnified a thousandfold in the car. When he talks, his grip on the steering wheel relaxes. Like two women wearing the same dress at a party, his hands like to stay as far apart as possible, one holding the wheel while the other leaps in the air to underline a point.

I try to discourage conversation, partly because of the obvious danger of such a distraction, but also because of the nature of the conversation. Andrew, a font of wisdom and insight at other times, is, upon getting into a car, seized with a voracious appetite for banalities. He holds forth on traffic patterns, weather prospects, suddenly notices new shopping centers or directional signs that have been there for years. The adolescent boy's love of numbers and lists, lurking beneath the sophisticated veneer of the grown man, resurfaces with a vengeance. Mileage becomes a matter of consuming interest. He checks the odometer on leaving the city and again when arriving, announcing the mileage as if it might have changed over the winter.

I have several alternatives in this situation, none of which is to hope for Andrew's improvement. The problem thereby becomes my problem, since it is/one that Andrew doesn't acknowledge. Perhaps the basic definition of a bad driver is one who doesn't know he is a bad driver, since it is his destiny to create a turmoil from which he remains magically immune. When I challenge Andrew about his driving, privately or in front of friends, he agrees, but he doesn't feel it deep down, at the level where it connects with the heart and the nervous system.

Of course, the most obvious solution is to become a President's wife or make enough money to afford a chauffeur. Other people, when they dream of hitting the jackpot, fantasize castles in Spain or flights on the Concorde; I yearn for a driver. Forget about the car: it can be a humble compact if there is a professional in the front seat.

I thought of remedial driving school, but I had to accept the fact that Andrew's bad driving is part of his otherworldly personality rather than a flaw of coordination, thus not susceptible to will or logic or correction. Driving is not a little thing, a side issue; it is as much a part and parcel of character as the misnamed "side effects" of a drug are intrinsic to the drug's benevolent properties. And out of the logic of character formation comes the logic of couples. With this came the realization that Andrew is my alter ego, my doppelganger, expressing in action the distaste for driving I have always felt. Further, in confronting his bad driving I was confronting my own deepest conflicts as a woman, torn between the desire to be a man's equal and the retrogressive longing to be cared for.

I love this man for his mind, his directness, his humor, his tolerance, the support he gives me in every aspect of our stressful life. But... why can't he drive like my daddy?